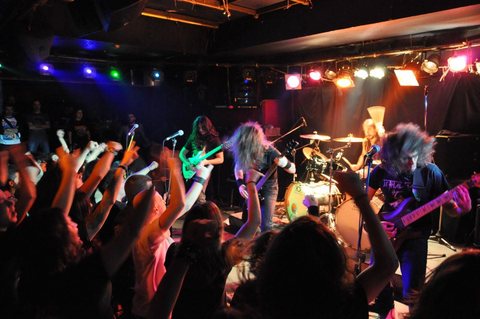 In 2009 saw the band entering the studio for the first time to record their self released EP 'Rotting Life' which consisted of 7 tracks.

After the recordings the band wanted to add more aggressiveness to its music and in order to so, some changes needed to be done. Thus, during 2010 a couple of changes in the line up were made forming the band as follows:

In 2012 the band entered the studio to record their debut full length album 'Igniting Chaos' and was released in January 2013. by Horror Pain Gore Death Productions (USA)
Just after finishing the recordings of their debut album Yiannis left the band due to personal reasons which resulted in Khatch taking on the vocal duties as well and forming the band's current line up which is as follows:

Shortly after the band entered the studio once again to record their second full length album entitled 'Mastering the Art of Killing' which was released released by Pitchblack records in October 2014 that was followed with a co-headling European tour with Master (USA).

After more than two years of promoting the new album with support act to Kreator, the band entered the studio and recorded their third full length album entitled 'Pure Eternal Hate' and is sceduled to be released sometime in 2018.