Our new videoclip is out!!! 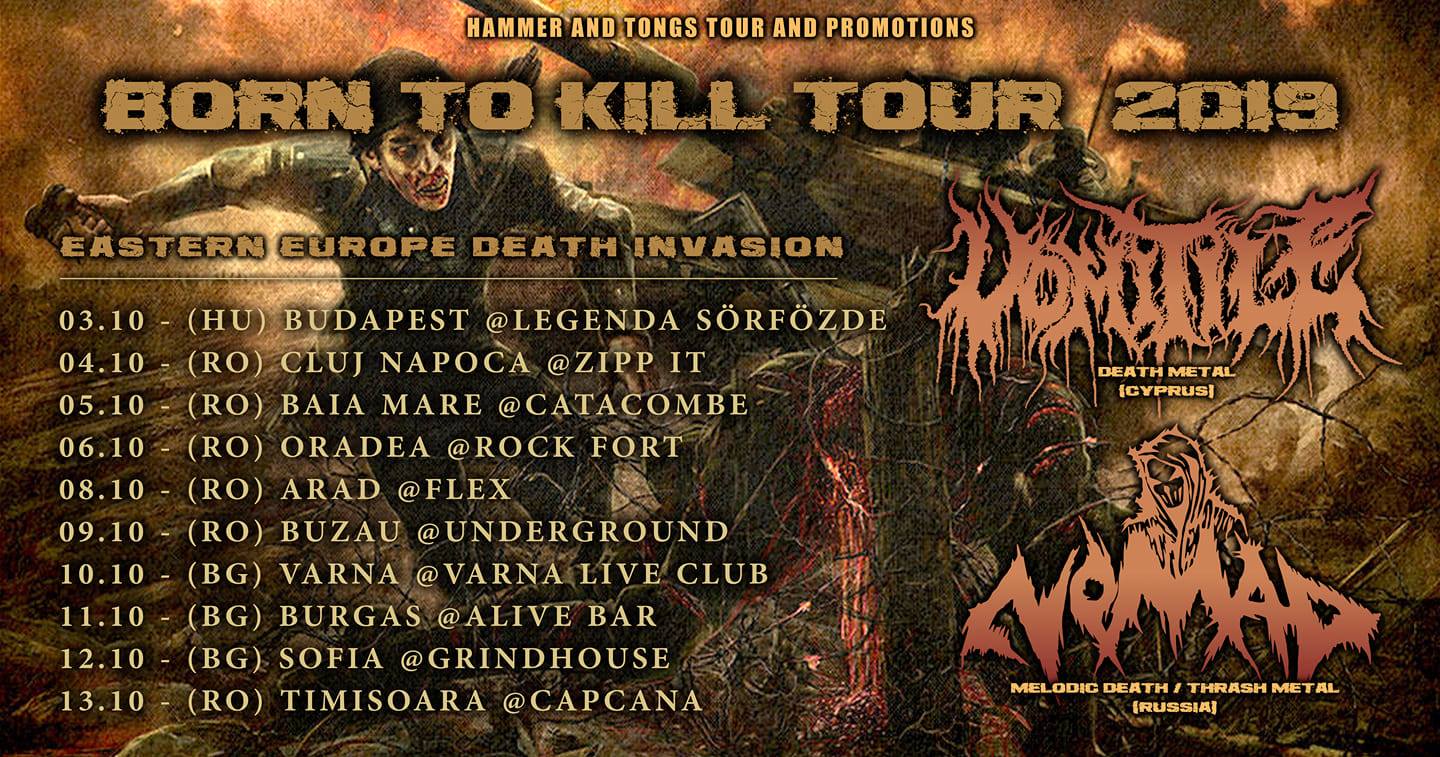 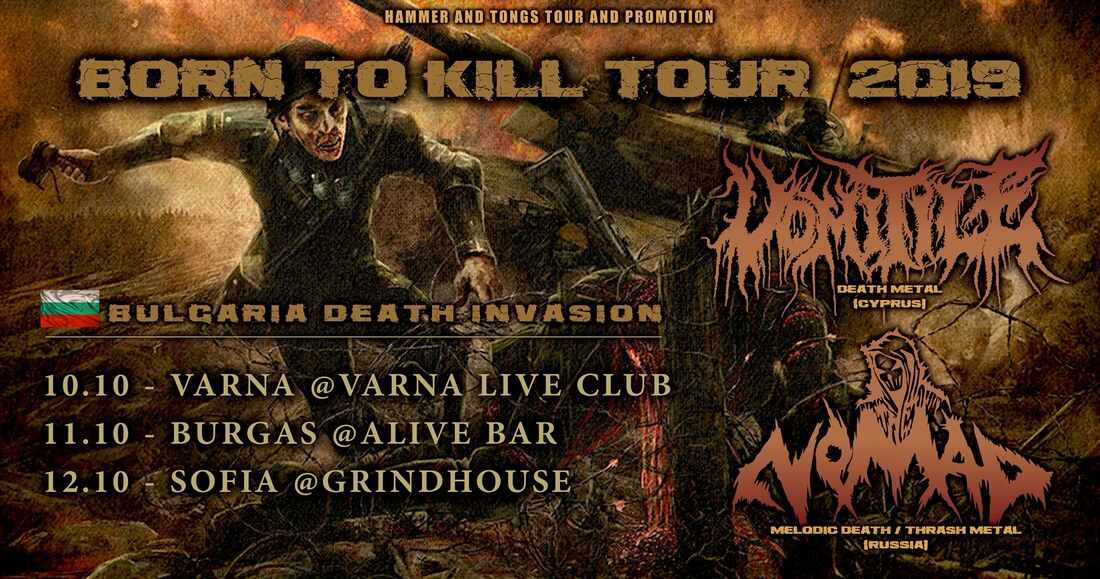 ROMANIA WE ARE COMING FOR YOU!! 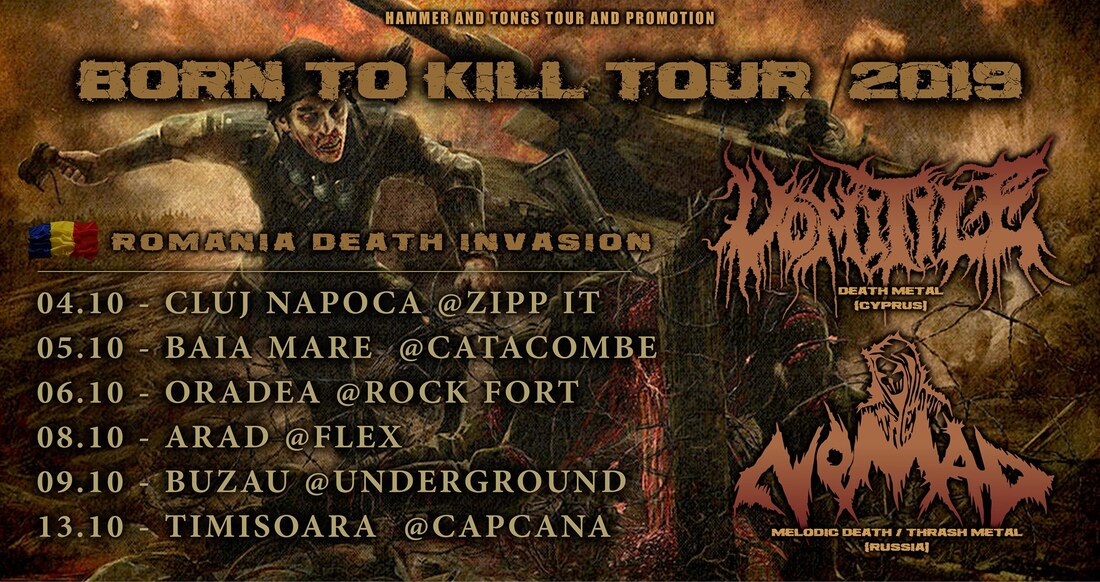 HUNGARY ARE YOU READY? 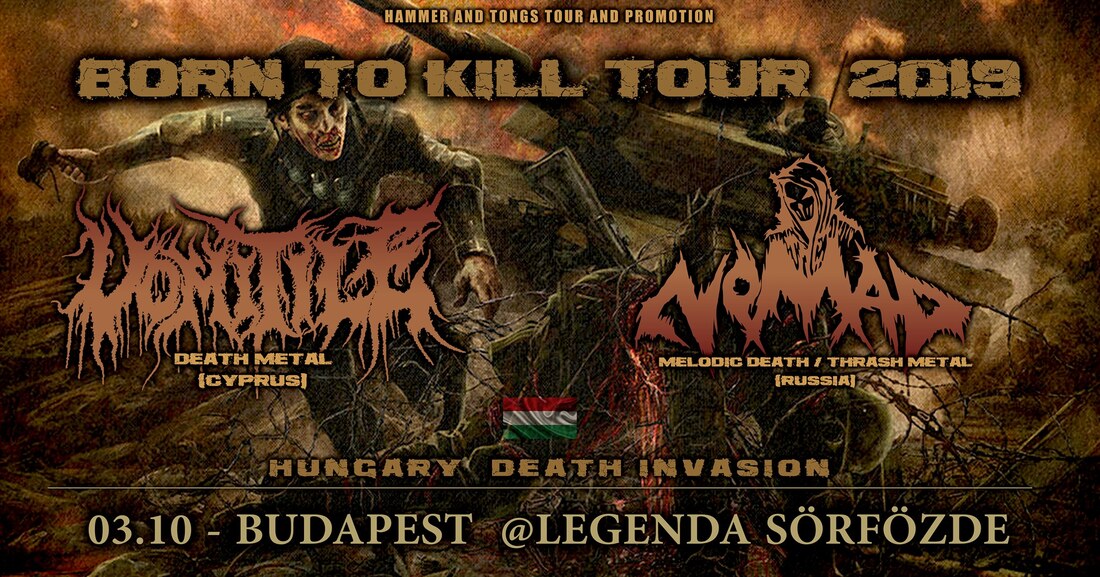 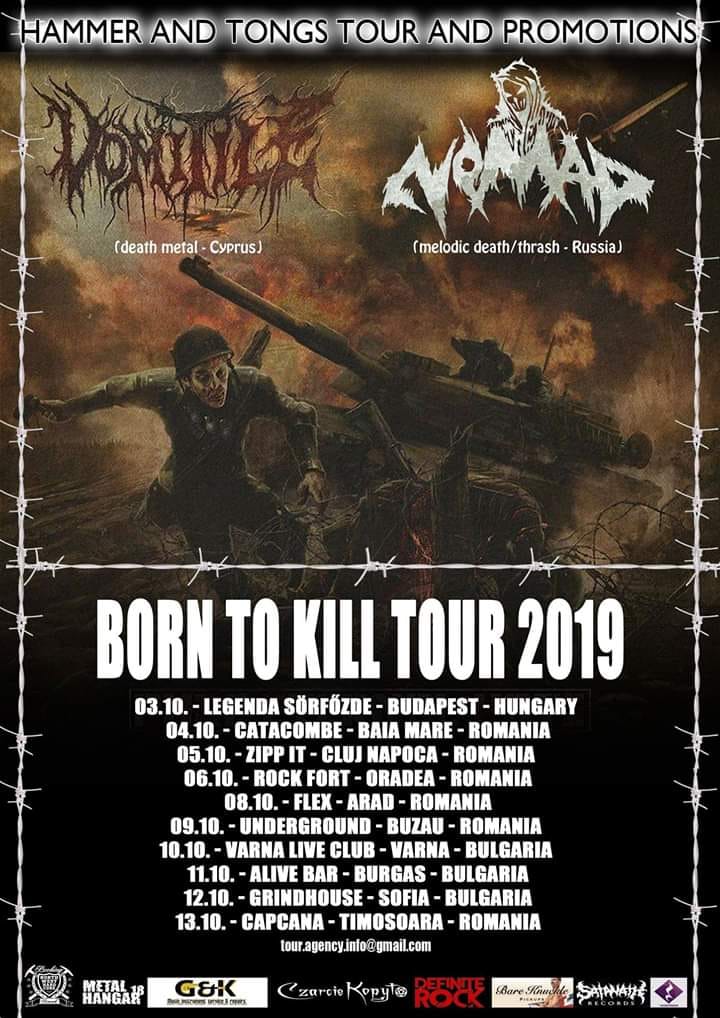 Our second tour will take place this fall together with our friends "Nomad" from Russia. See you on the road!!! Check details on the official poster!!
​

March 2019.
The band will be playing their first show of the year at RED Club Nicosia this 19th of April.
Do not miss it!! New merch and fresh tracks from our newest album will be performed. 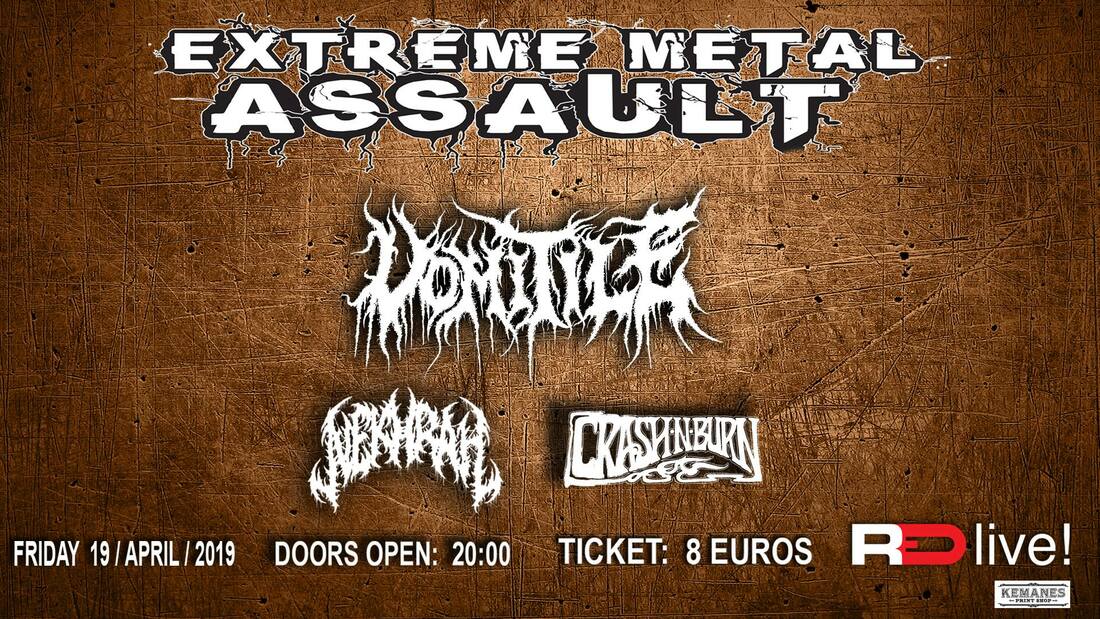 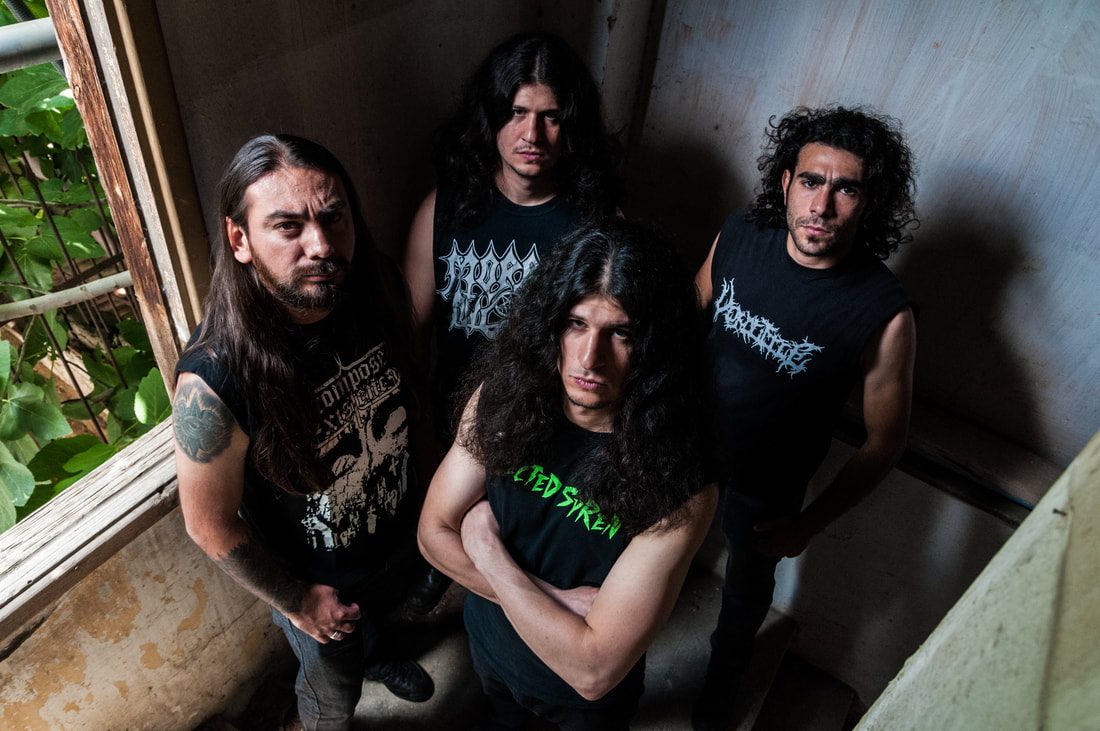 July 2018.
The wait is over!!!! Order your copy of the limited edition 'Pure Eternal Hate' while last!!!
​15 euros including shipping cost worldwide. paypal vomitile@hotmail.com
July 2018.
Nicosia, RED Club, you were fucking amazing!!!! See you till next time!!! DFM \m/!!! 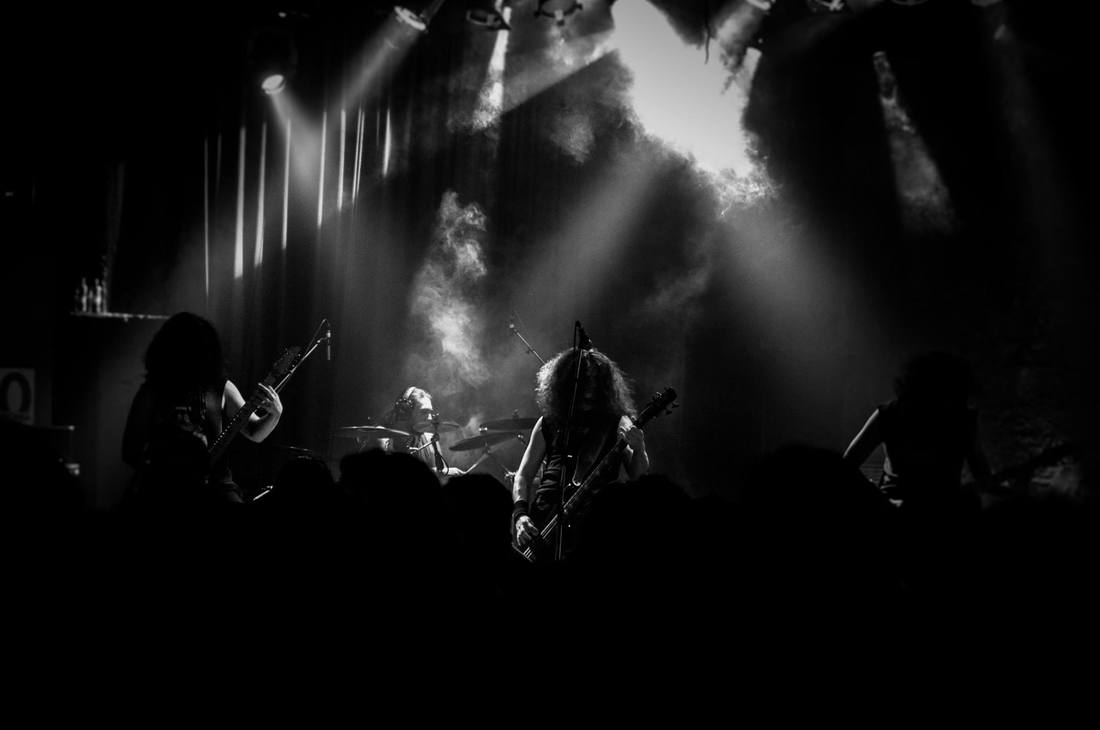 June 2018.
Nicosia are you ready? See you all maniacs there!! DEATH FUCKING METAL!! 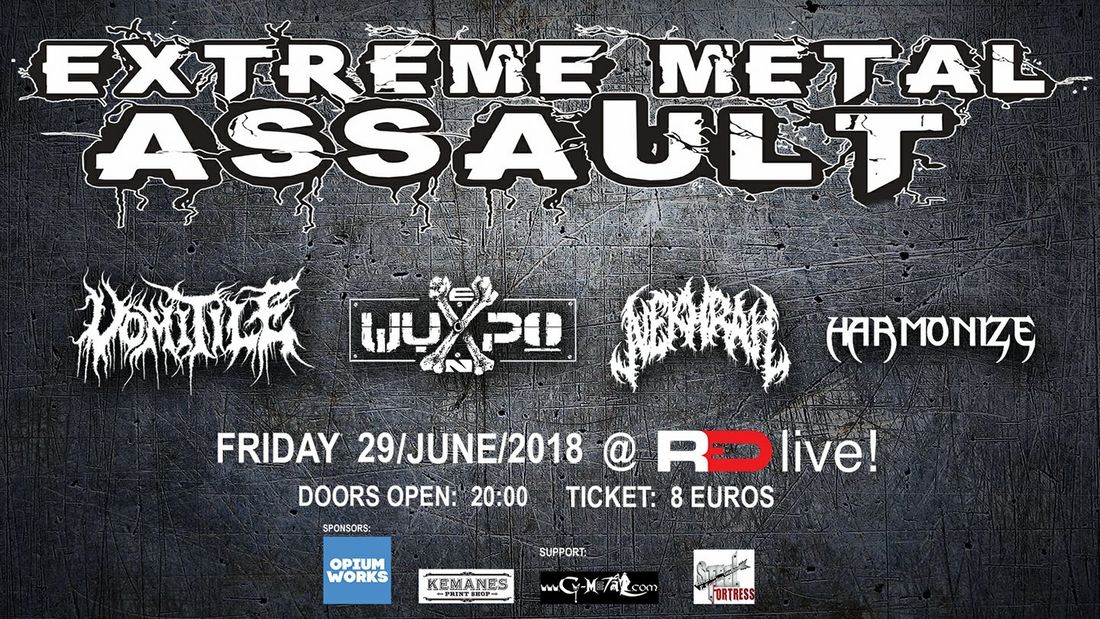 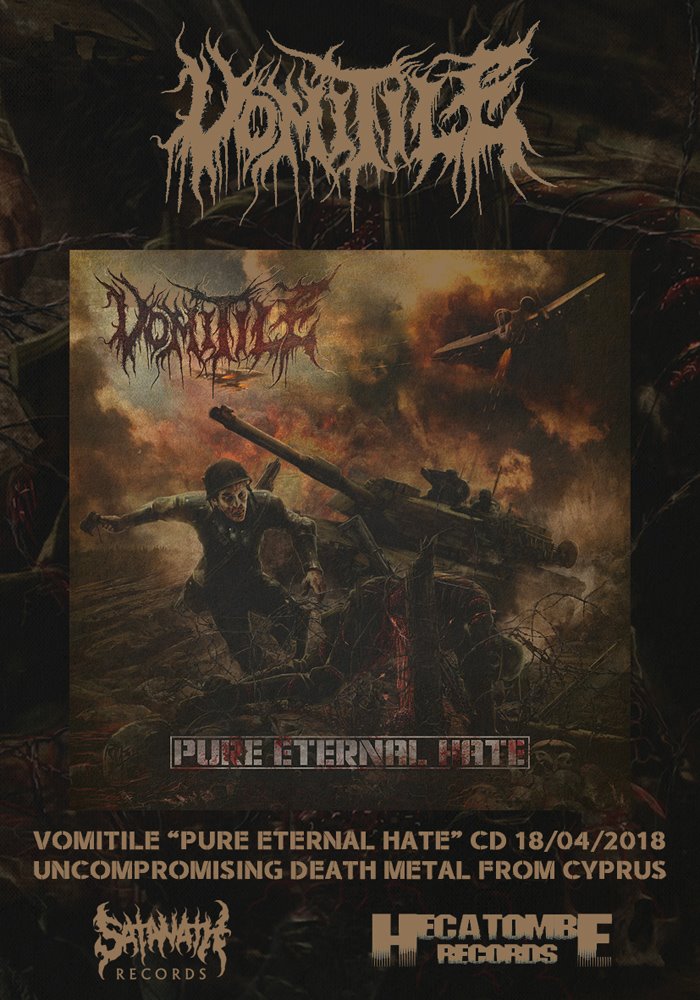 As promised we have some great news to share. 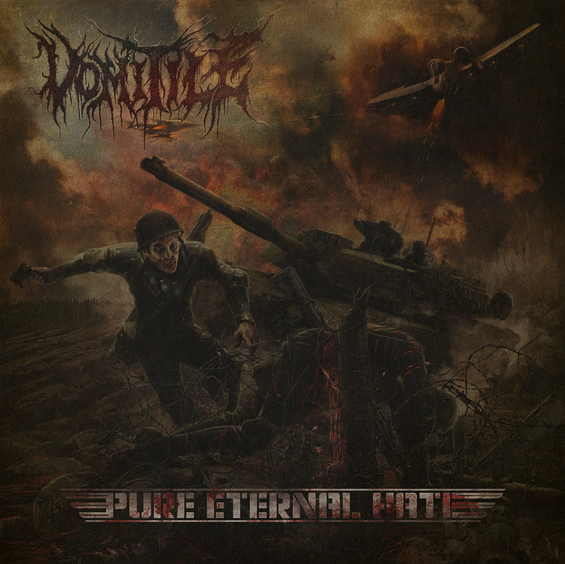 It is with great pleasure to share with all of you the cover artwork of our upcoming album called 'Pure Eternal Hate'
Also we are revealed the track list of the new material.

February 2018.
​
The album is completely finished and ready to be unleashed.
News about our new record company will be revealed soon. 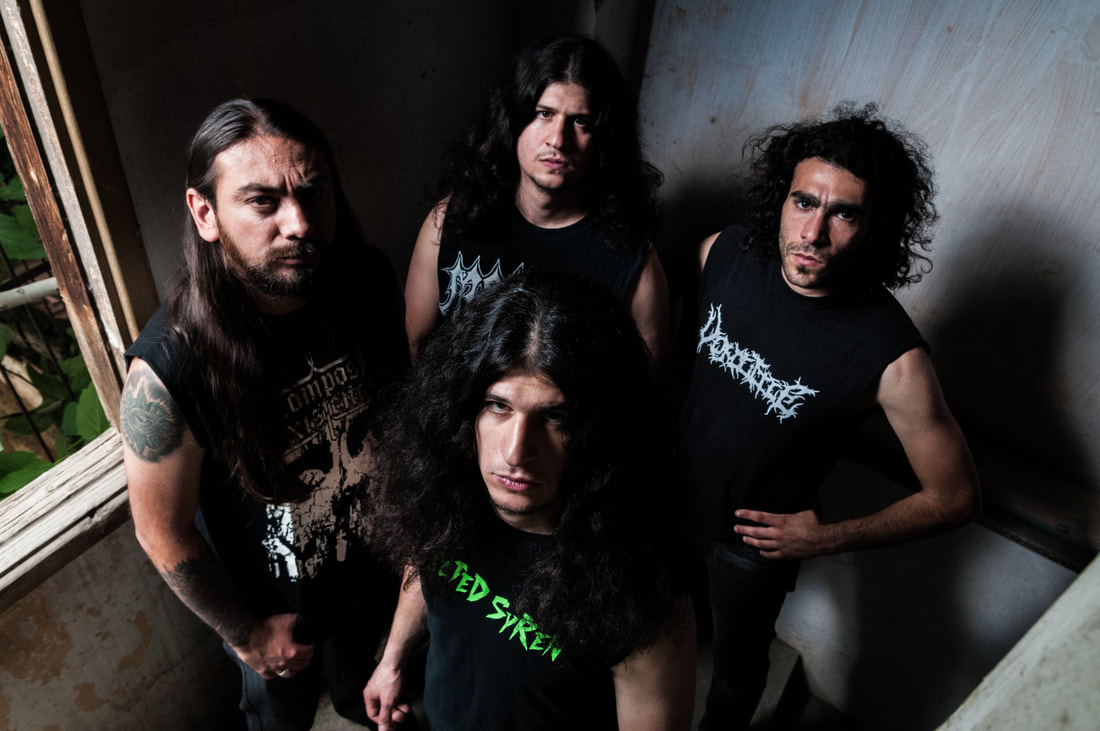 Vocals are officially finished!!
After some intense days at Soundscape Studio, we have completed our last stage of recordings!!
Stay tuned for more news!! 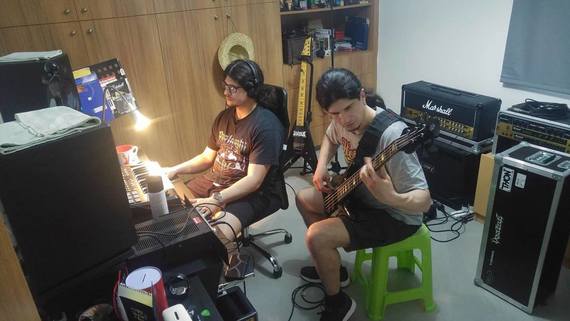 It's with great pleasure to share with you that the bass recordings are done!!
April 2017.   NICOSIA you were awesome!!! See you next time!!
​ 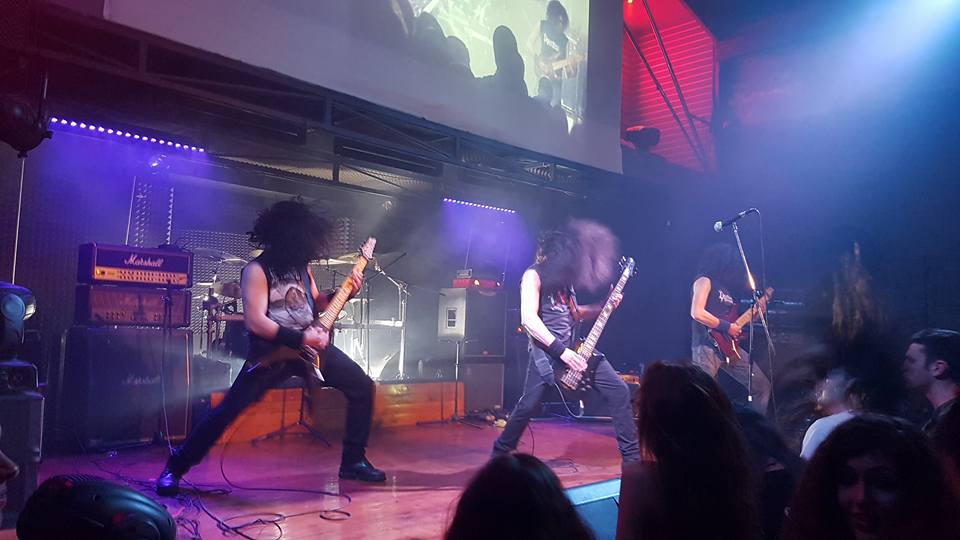 April 2017.
​This April we will be playing in Nicosia with our mates from Blynd, Infected Syren, Stainless, Dark Void & Spolied!! Its gonna be a hell of a show!!

After some intense days of recordings at Soundscape Studio, we are more than happy to share with you that our guitars for the next album are done!! 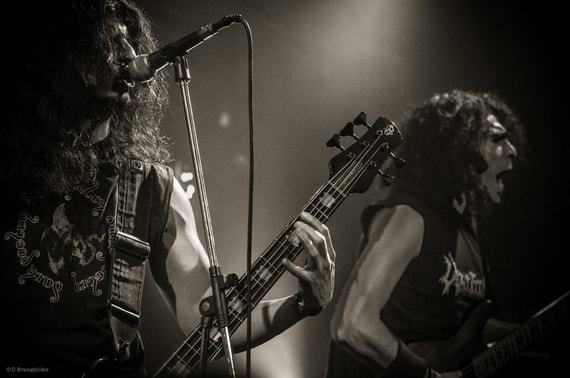 SAVINO you are always awesome!!
See you next time!!


Next stop guitar recordings for our upcoming album!! 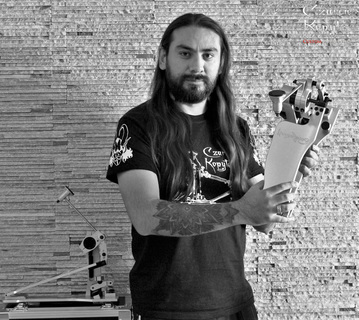 August 2016
Thanks to the Vomit Death Squad and all the maniacs who supported us last night!!!
Also thanks to all the bands that played with us this time, you all were amazing!!!
DEATH FUCKING METAL!!! 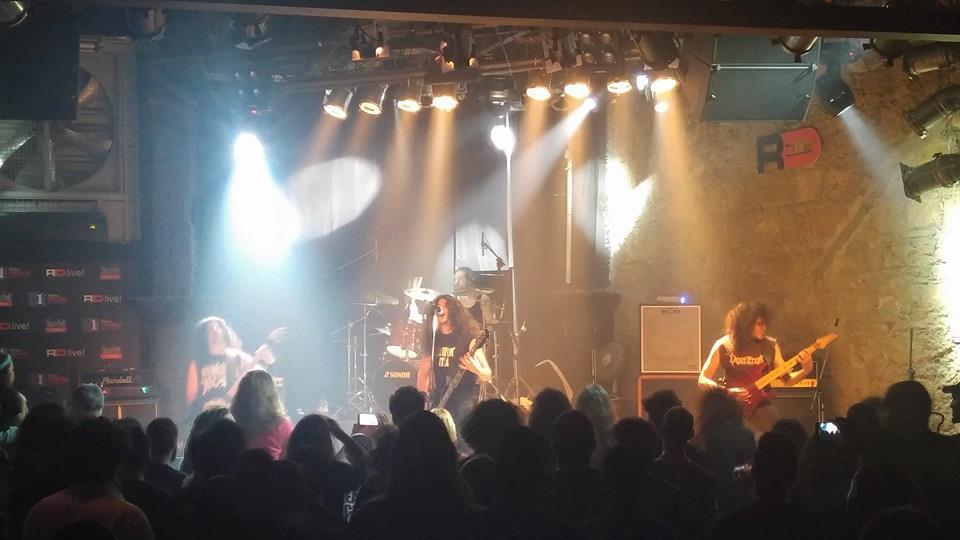 June 2016
The band will perform in Nicosia Cyprus after almost a year at RED live with Infected Syren, Teror, Nekhrah and Kraama. July 31st 8:00 pm.
See you all there!!

September 2015
Pavilion Hall you were fucking amazing!! Thanks to the Vomit Death Squad for their support!!
DEATH FUCKING METAL 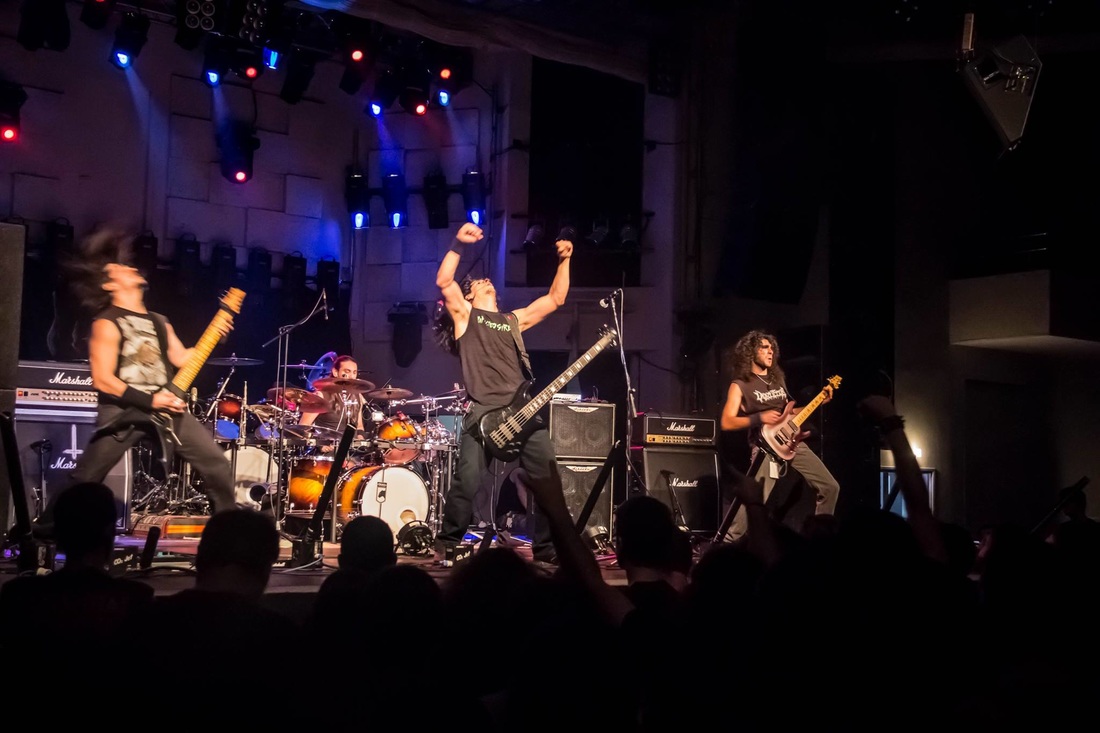 July 2015
Thank  you Savino (Larnaka)
​You were fucking amazing!!! See you next time!!
May 2015
Vomitile will play for the very first time in Larnaka CY along with the locals 6th Dimension & What Remains Unseen!! The concert will take place on the 27th of June 2015 at Savino Live!! 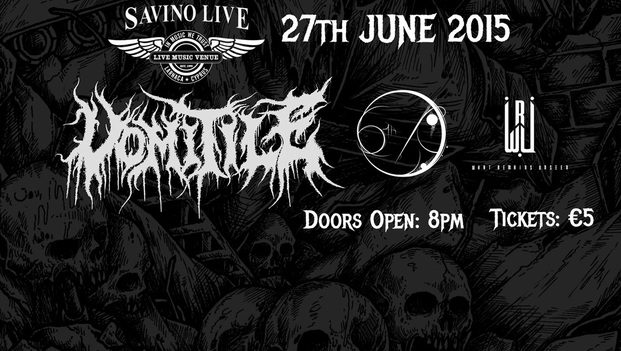 April 2015
Great news!! The band has been confirmed as 'Special Guest' for the KREATOR's concert in Nicosia Cyprus this 29th of August 2015 at Pavillion Hall. More summer shows to be announced!! 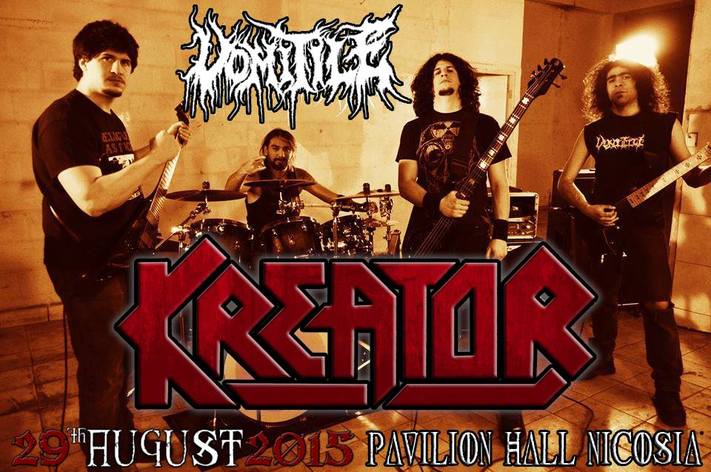 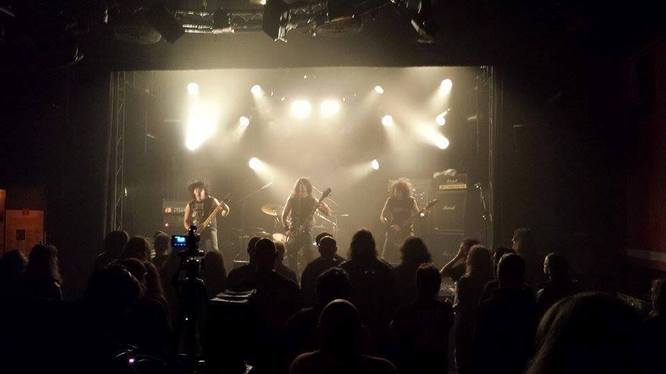 After more than 10 days on the road our first European tour has ended successfully!!

It has been an honor and great experience to share the stage with Mr Paul Speckmann and the mighty Master, Acid Death and Scargod. We would like to address our gratitude to our Greek and Austrian brothers for being so supportive and for the good vibe during the whole tour.
We also would like to thank our Tour Managers Falko and Jorg, Martin "Viking" (Stage Manager) and Sebastian (Bus/Nightliner driver) from the touring agency for handling the entire tour with superb professionalism.
The band also thanks all the venues and clubs in Germany, Netherlands, Belgium, France and Switzerland for their pleasant hospitality and support.
Last but not least we would like to thanks all the people who attended the gigs because you made this tour successful and we will never forget this first amazing experience.

Without your support the Vomit Death Squad wouldn't exist!!
Thank you all once again and stay tuned for upcoming news. 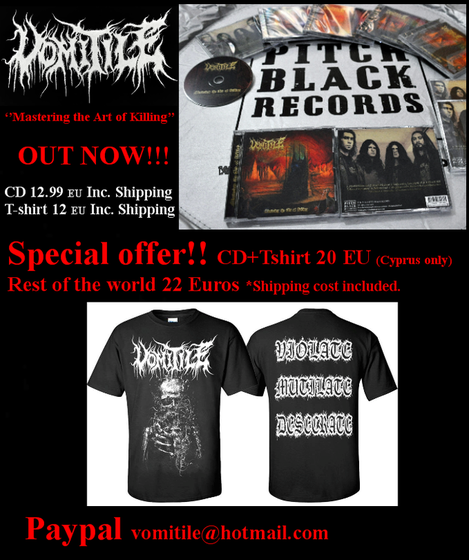 
"Mastering the Art of Killing'' is finally out!!! 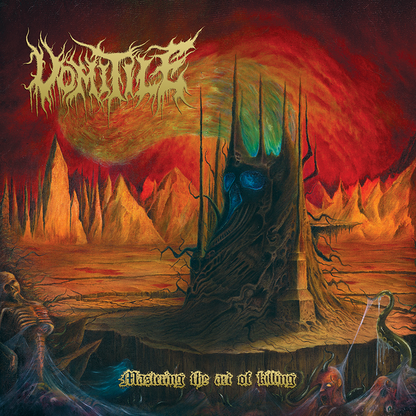 The second full length album 'Mastering the Art of Killing' will be released this October via Pitchblack records, Cyprus. 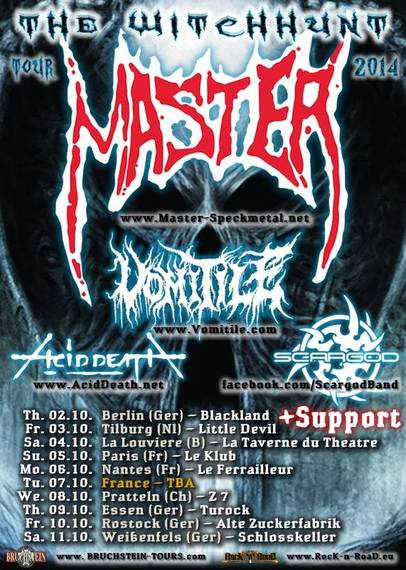 May 2014
Glad to share with you Hugo's interview with SICKDRUMMER MAGAZINE, the biggest online community of extreme drumming!!
Click here!
April 2014
The band will be playing in October at the Xtrem-Wolf-Fest-III in Belgium, along with death metal pioneers MASTER (USA) Stay tuned for more info!! 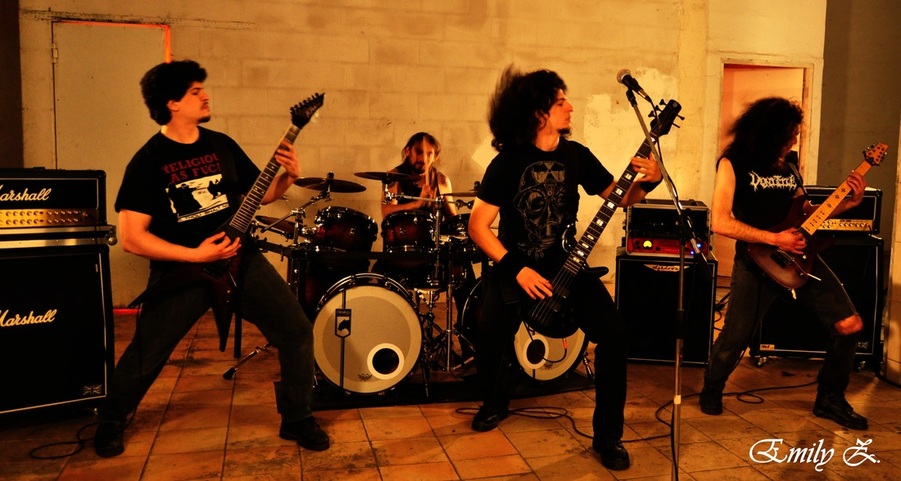 
January 2014
With the new year in the mixing of "Mastering The Art of Killing" has almost finished and within the next couple of weeks it will be sent at Stage One Studio in Germany to be mastered by Andy Classen! (Krisiun, Asphyx, Rotting Christ, Destruction etc).
Stay tuned!!
DEATH FUCKING METAL!


December 2013
The band will perform for the first time at Power of the Night Festival in Cyprus during the summer of 2014. (Check here further info) http://www.potn-fest.com/vomitile-at-potn-ix-1322